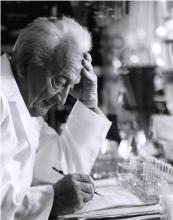 Szent-Györgyi's early researches at Groningen concerned the chemistry of cell respiration. He described the interdependence of oxygen and hydrogen activation and made his first observations on co-dehydrases and the polyphenol oxidase systems of plants. He also demonstrated the existence of a reducing substance in plant and animal tissues. At Cambridge and during his early spell in the United States, he isolated from adrenals this reducing substance, which is now known as ascorbic acid. Returning to Cambridge in 1929, he later described the pharmacological activity of the nucleotides with Drury.

After winning the Nobel Prize for his study on vitamin C and cell respiration, Dr. Szent-Györgyi set his sights on finding a way to defeat cancer.

Late in life, Szent-Györgyi began to pursue free radicals as a potential cause of cancer. He came to see cancer as being ultimately an electronic problem at the molecular level. In 1974, reflecting his interests in quantum physics, he proposed the term "syntropy" replace the term "negentropy". Ralph Moss, a protegé of his in the years he performed his cancer research, wrote a biography entitled: "Free Radical: Albert Szent-Gyorgyi and the Battle over Vitamin C

Beyond his laboratory, Dr. Szent-Györgyi was a leading advocate for developing resources to provide scientists with the financial support necessary to pursue novel cancer research ideas. In 1973, he changed the face of cancer research funding by co-founding NFCR with entrepreneur Franklin C. Salisbury. Since then, NFCR has provided more than $275 million in support of cancer research and revention education programs.

The Szent-Györgyi Prize for Progress in Cancer Research

The Szent-Györgyi Prize for Progress in Cancer Research was established to honor an outstanding researcher whose scientific achievements have expanded our understanding of cancer and cancer causation; whose vision has moved cancer research in new directions; and whose discoveries have resulted in notable advances in cancer prevention, diagnosis, or treatment. The Prize also promotes public awareness of the importance of basic cancer research and encourages the sustained investment needed to accelerate the translation of these research discoveries into new cancer treatments.

NFCR is committed to upholding Dr. Szent-Györgyi's vision of curing cancer through innovation and collaboration. As part of this commitment, NFCR has established this Prize to honor scientists who have made extraordinary progress in cancer research and to focus attention on the essential role of basic research in finding the still elusive answers to the mysteries of cancer.

The Szent-Györgyi Prize serves to stimulate continued investment in the pioneering research that will produce scientific breakthroughs and lead to a deeper understanding of the scientific concepts behind the genetics and molecular makeup of cancer. By calling attention annually to achievements in this area, it is our desire to heighten awareness of the kind of research and discovery that must be accomplished before we can hope to produce cancer cures.

Click here to watch the interview with Albert Szent-Györgyi, speaking about wheat germ, about his theory to cure cancer.

The information on this website is provided for informational purposes only and is not meant to diagnose or treat any health problem or disease or be a substitute for advice provided by a doctor or other qualified health care professional. Patients should always consult with a doctor or other health care professionals for medical advice or information about a diagnosis and/or treatment. In the case of diagnosis or treatment of any disease, particularly tumour related diseases, a healthcare professional should always be consulted. Do not attempt to self-treat.

This Avemar website is intended solely for the use of Healthcare Professionals.

By selecting Continue, you hereby confirm you are an HCP and consent to view the contents of this site.